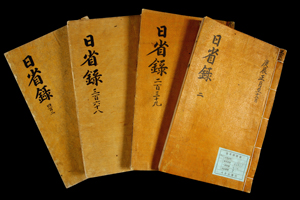 At the 10th International Advisory Committee (IAC) meeting held in Manchester, England, from May 23-25, 2011, “Ilsungrok” was accepted for inscription on the UNESCO Memory of the World Register. The Kyujanggak Institute for Korean Studies of SNU houses this significant historical record.

“Ilsungrok” consists of 2,329 volumes containing episodes about kings’ daily lives and national affairs of the Joseon Dynasty (1392-1910) dated from 1760 to 1910. It was first initiated by King Jeongjo (1752-1800), the 22nd king of the Joseon Dynasty, as a private diary written when he was yet a prince. King Jeongjo was deeply impressed by the words of Jeungja in The Analects of Confucius -- “I reflect on myself every day in three aspects” -- and started to keep these diaries in order to practice self-examination.

King Jeongjo continued keeping diaries for 7 years after he ascended the throne. However, with much work to do, it became difficult for him to continue keeping diaries by himself. So from 1783 on, the king only gave approvals to the diaries written by scholars of the royal research center Kyujanggak. Aiming at perfection, the scholars collected and arranged all-inclusive materials related to government affairs when writing the diaries. The approved diaries were published into 2 books every month. During that time, a personal journal, “Ilsungrok”, was adapted into and accepted as an official governmental record. 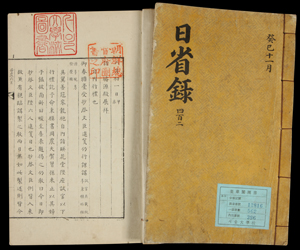 “Ilsungrok” has several noted characteristics. It adopted the system of “kang (剛) and mok (目),” organizing the diaries into divisions and subdivisions so that kings would be able to find materials readily. Also, it uses the personal pronoun “I” to symbolically show that the subject of the diaries is the king. In addition, stories regarding punishment, prison, debates in the palace and reports from secret royal inspectors and dispatched envoys are unique features of “Ilsungrok”.

Nine national treasures of Korea are now listed in the Memory of the World Register, namely, “Annals of the Choson Dynasty”, “Hunmin Chongum Manuscript”, “Baegun hwasang chorokbuljo jikji simcheyojeol (vol.2)”, “Seungjeongwon Ilgi: The Diaries of the Royal Secretariat”, “Uigwe: The Royal Protocols of the Joseon Dynasty”, “Printing woodblocks of the Tripitaka Koreana and miscellaneous Buddhist scriptures”, “Donguibogam: Principles and Practice of Eastern Medicine”, “Collections of documents on the Gwangju Democratization Movement of 1980” and “Ilsungrok”. Among them, “Annals of the Choson Dynasty”, “Seungjeongwon Ilgi”, “Uigwe”, and “Ilsungrok” are housed at the Kyujanggak Institute for Korean Studies of SNU.