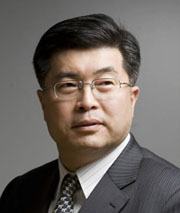 A Gutenberg Research College Fellow holds a special researcher rank of international authority, and it is the first time that the GRC has chosen a scholar from outside Germany to become a fellow. This also makes Professor Char the first Korean to have become a fellow of the GRC.

Over 180 SCI articles were published by Professor Char on his research in the field of polymer thin film, and such continuous research for the last 20 years has been widely acknowledged. He is also known for having been awarded the Gutenberg Research Award by the Johannes-Gutenberg University of Mainz and the German Chemical Society in 2006.

Professor Char will be providing academic guidance to three German doctoral students for the next two years, with all funds provided by the GRC at the Johannes Gutenberg University Mainz.