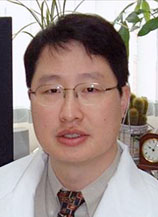 Professor LYOO In Kyoon of the SNU College of Medicine and Professor KIM Ji Eun of Ewha Womans University's Department of Cognitive Science have discovered the relation between the dorsolateral prefrontal cortex (DLPFC) and post traumatic stress disorder (PTSD). They conducted a 5-year observation of 30 survivors from the Daegu subway arson attack beginning in 2004, a year after the tragic incident took place. The 30 victims were those who experienced being locked up in the burning subway without suffering any physical injuries and their recovery process was Lyoo and Kim's main concern. Each examination took 4 hours but the subjects did not hesitate to take the long trip to Seoul from Daegu and thanks to them, the joint research team was able to conclude that the DLPFC region might play a critical role in overcoming psychological sequelae. The dorsolateral prefrontal cortex particularly developed in anthropoids -- refers to the anterior part of the frontal lobes of the brain and is known to control negative emotions, sometimes interpreting an unwanted memory in a favorable way.

Lyoo and Kim measured the dorsolateral prefrontal cortical thickness of the 30 victims using a structural MRI once a year. In 2004, the average thickness turned out to be 3mm, 5% thicker than ordinary people (2.85mm) who did not suffer from PTSD. However, as time passed by, the average thickness gradually decreased and in the last MRI taken in 2008, the figure dropped to 2.88mm. Professor KIM explained that most of the subjects will not suffer from PTSD once the thickness of their DLPFC reaches that of ordinary people. She also said it was the first time in which a research concerning the effects of the DLPFC was done on humans, as all former research made use of experimental rats.

The team performed neuropsychologic examinations on the 30 victims in addition to brain scans and it was further discovered that a certain gene called BDNF helps the thinning of the DLPFC region. The protein produced by BDNF was shown to affect dorsolateral prefrontal cortical thickness and therefore is expected to result in a treatment which can easily cure PTSD. Lyoo and Kim's research has been published in the July 2011 issue of Archives of General Psychiatry, a world-renowned academic journal in the field of psychology and neuroscience.