Share this to Kakao Talk Share this to Facebook Copy URL
How much does it really cost to live as an SNU student? The exchange rate is easy to google but what we are truly curious about is the real life expenses. Let's find out the answer by looking closely at the lives of real students- Inas LEE and Ritchie LEE, both undergraduates, Subho CHAKLADER and Yangxiao Dong, graduate students, and Alex and Christina BIRKEL, doctoral candidates. 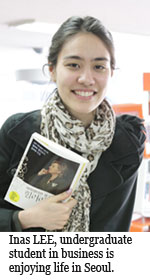 Inas LEE (College of Business Administration), from Egypt, is finding her life in Seoul and especially at SNU very enjoyable.

Her tuition fees have been around 2,500,000 won per semester so it will cost about 20,000,000 won in total for 8 semesters in order to graduate. One time she received a scholarship for foreign students but it only covered about 25% of her total tuition fees. However, she has been a work-study scholarship recipient of the Global Information Center for the past two years. The scholarship pays her 5,000 won per hour. She thinks it is a very useful way of spending her- time between classes. Her textbooks, mostly English books, are expensive but it is not too bad because sometimes she can borrow them from alumni and it is usually just a one-time expense at the beginning of every semester.

One of her greatest expenses is housing. She is sharing an apartment around school (near Seoul Nat'l Univ. subway station) with two of her friends from England and Korea. For each person, it costs 550,000 won for monthly rent (with all maintenance fees included) in addition to a 5,000,000 won deposit paid upon moving in. It is more than the average price but she finds it better to live close to school and be able to use the shuttle bus with better security.

Another major expense is food. She buys cereal or fruit for her breakfast, which costs about 20,000 won a week. For lunch and dinner, she usually eats at school, where each meal costs about 2,500 - 3,000 won. On weekends (except during exam periods), she mostly goes out to eat with her friends for spaghetti or other international foods. Such meals cost about 20,000 won each and she spends 5,000 won more for coffee.

She likes to shop in the Myeongdong area and she spends about 200,000 won at a time when she does. It costs her more if she watches movies or has some drinks. She used to spend 20,000 won a week on drinking with her student club but she does not anymore, as she’s now trying to focus more on studying than club activities. 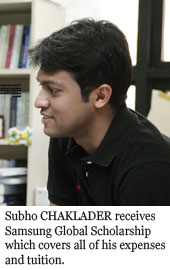 Subho CHAKLADER (Department of Electrical Engineering), an adventurous international student from India who likes to travel around and outside of Seoul, is completing his master's program this semester.

He receives a Samsung Global Scholarship which covers all of his expenses, from tuition fee and accommodation to living expenses. He can even enjoy lots of good English books or trips outside of Seoul if he saves some money during the semesters. He is living in a dormitory with his friend from the same program. Although he finds it a little small, it is okay since the scholarship pays for it and it is convenient for him to live on campus.

His major expense is food. He usually goes to the dormitory or school cafeteria for breakfast and lunch. He often likes to go out for dinner, at least 3 times during the weekdays. The cost ranges between 10,000 won and 30,000 won depending on where you go. It is cheaper to eat in areas nearby campus, such as Nakseongdae and Seoul Nat'l Univ. station, while it is more expensive to eat in areas farther from school such as Kangnam or Itaewon. On weekends, 90 percent of the time he goes out to eat and also enjoys having drinks afterwards with his friends. A bottle of beer is 7,000 won and a cocktail is about 10,000 won.

During vacations, he likes to spend his time traveling around Korea. His most recent trip was to Jolla Province (several hours south of Seoul) for 3 days. He traveled on a shoestring by using buses and trains for transportation and Korean B&Bs for accommodation and in total it cost only about 300,000 to 350,000 won.

He mentioned that it is much easier to travel in Korea -- especially to tourist spots in Seoul these days -- since the government provides many English services for free and they are very well-organized.

Overall, he strongly recommends that other international students who have scholarships enjoy their life in Seoul without worrying. 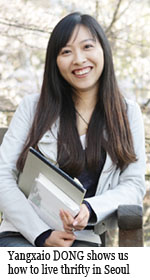 Yangxaio DONG (Department of Korean Education), from China, shows us how to live thrifty in Seoul.

Firstly, she always studies hard to keep her GPA over 3.3 so that she can keep receiving her Lotte Foundation Scholarship which covers her entire tuition fee, (3,400,000 won), with a little extra support for living expenses (600,000 won per semester).

Also, she is planning to apply for the dormitory from next semester which will cost her less than where she lives now, in a studio close to Shillim station paying 400,000 won for monthly rent in addition to a 3,000,000 won deposit.

She saves even more money by cooking herself rather than eating out. Since she only has classes two days a week, she can prepare her own meals, costing her only 7,000 to 8,000 won per day. However, she finds that vegetables and fruits are too expensive in Seoul, especially these days. 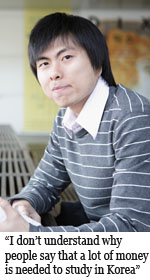 Ritchie LEE (Department of Materials Science and Engineering), from Malaysia, does not really understand why people say that a lot of money is needed to study in Korea even when you have a scholarship.

He is getting a full scholarship from Korean government scholarship program (KGSP) which covers all of his expenses and even covered the one-year Korean language course in Cheonan he completed before coming to SNU. Since the scholarship pays his tuition fees, accommodation, and a stipend for living expenses, he is very satisfied with his current circumstances living in Seoul.

He usually eats at a school or dormitory cafeteria for all three meals but eats out about once a week, although never paying over 20,000 won for one meal. He doesn't have many other expenses because he does not enjoy drinking much.

Sometimes he needs to buy textbooks or go shopping about once every season but this does not cost him more than 200,000 won each time. He thinks prices are higher here compared to his country but reasonable, except for medical bills in Korea.

Ritchie's Expenditure Chart
Tuition fee_exempted, Housing and other expenses are covered by stipend. 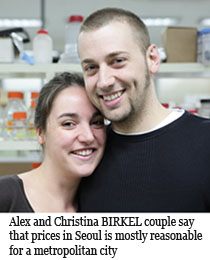 A happily married couple, Alex and Christina BIRKEL (School of Chemical and Biological Engineering), are having great fun in Korea hanging out with Korean friends and drinking together during their six months here with an exchange program.

They do not need to worry about their expenses much because tuition fees are basically free in Germany (they only pay some transportation fees) and they also get their salary from their original school that they can use to cover their living expenses here, including housing.

Living in a studio close to the subway station and school with only a 3-month contract is very satisfactory for them.

They like to try many different foods in Seoul such as kimbab, Korean dumplings called mandu, and Korean roasted ribs. On weekends, they visit other areas of the city like Hongdae, Kangnam and City Hall. After having dinner, some drinks, karaoke or going to a club usually costs them about 70,000 won per person. They also enjoy buying some small electronics like an electronic dictionary or mp3 player in Yongsan because it is cheaper there than in Germany.

Although some household goods such as shampoos are too expensive in Korea, other prices are reasonable considering that Seoul is one of the biggest metropolitan cities in the world.